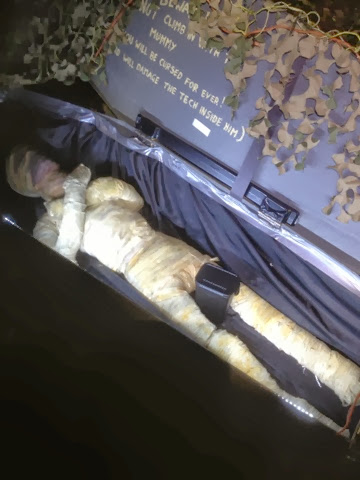 Me and frodo have been out this week on walks as advised by the doctor and decided to clear out abingdon, get a couple at Isley and a few out at lambourn. However today was the big one where we also met some of our caching friends too.
The Halloween mega is one event that always guarantees quality and quantity. In the daytime we walked 11 ish miles completing over 60 caches, we had also done some drivebys too which helped add up to and the caches in the forest for the daytime were really good quality so we knew we were in for a treat later on.
Come 6pm the event got its 1000 person sign in making the event mega. The night time caches got released shortly afterwards and while everyone shot off me and frodo sat down and programmed the 19 caches in and sure enough it paid dividends as the organisers had on purposely put them in a random order. We plotted our route and was second to find to our first one where a local radio station were recording an item on geocaching and the next one which was my favourite was the night cache where you have to follow the reflective tags through the forest. With a very bright head torch it was easy and a ftf for me and frodo aka team text :) we came across lots of excellent caches a snake that squirted water at you on the daytime ones was my favourite, but nighttime there were to many to name; a deranged bat waving its arms about, a huge coffin and a electric chair with something/one in it being electrocuted were definitely my favourites. The only down point was the queues to a few caches where on one it took 15 minutes to sign the book, this didn't help when cachers decided to flick through the logs to see if their friend had been. Also groups of people on the trail walking slowly and taking up the whole path, going the speed me and frodo do (nearly 3.5mph average today) we don't hang about and don't need people slowing us down, please in future move out the way and let those who enjoy a fast pace through and those who want to go through the logbook wait till everyone has signed it.
So once again the Halloween mega committee have pulled it off and a big well done to you all.
Ps it was also refreshing to be allowed dogs in the venue so thank you.

Latest was to play about with the ever so versatile piglow for the raspberry pi. After printing off the demo scripts and getting the python code book out I got to work, but couldn't get it to work. After a SOS tweet Jason who did the example scripts and Gareth who is pretty good with technology asked what the problem was and in minutes Gareth had a script knocked up. After tinkering with the script with indents and a few other bits n bobs I adjusted brightness and time and now have a super fast and super bright flashing random twinkle led randomiser.
http://www.youtube.com/watch?v=ASWkYud2Qt0 is what I ended up with .
Please visit Gareth's blog at http://blog.pukkapi.co.uk/random-piglow-flicker/ for the script

Decided to get on with a few projects this weekend.
1. 2x16 lcd soldered and wired to a humble pi plate which works on raspbmc and other projects. 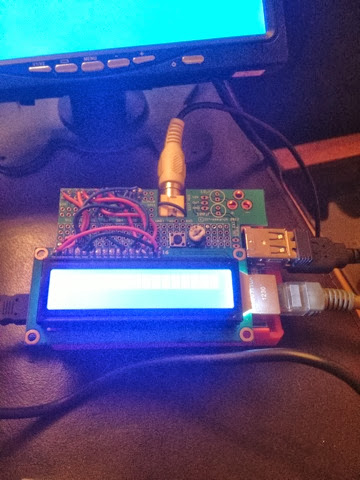 2. Adafruit gps after soldering the legs on and installing gpsd onto pi I left this in the conservatory to connect to the satellites, my next plan is to display the info on a lcd display and also to convert the co ordinates to hh mm.sss format.
3. Atmega/arduino project that I bought for a fiver that includes small breadboard, atmega chip and a few other bits and bobs. Following a couple of online tutorials and installing some software onto the pi I was able to get the project to flash four LEDs , next I want to use two LEDs to flash out a coded say morse code message that could be used in the field for a geocaching project . 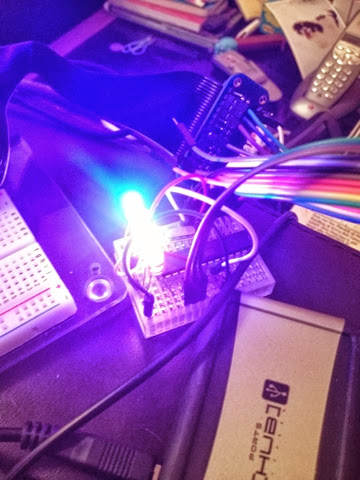 Lastly was the 8x8 lcd display, couldn't find what I needed for it but was looking around to try and make this a graphic equaliser and also want to get four more to make a cube up that a random light or two moves around the cube at speed.
Hopefully someone reading this project might be able to point me in the right direction. 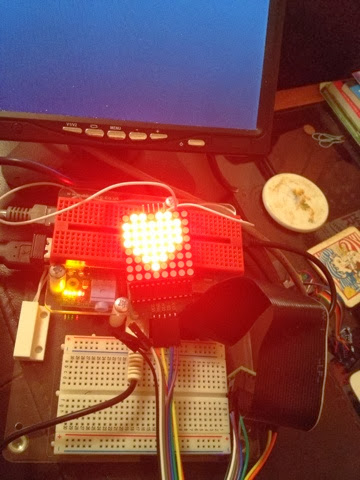 Recieved a phone call from my local garage today with good news, skoda uk were willing to foot some of the bill of my abs unit. As I had spent nearly 1200 quid on fixing it, service and new brakes all round they are paying 120 quid of it so now waiting for the cheque to arrive, at least that's the next service paid for.
Posted by Unknown at 22:19 No comments:

Make your own e cig juice

Firstly I must say this is dangerous if you don't follow the guides correctly. Nicotine often comes in bottles at 72mg strength. Very high nicotine cigarettes are around 30 mg and Marlboro lights around 8 mg.
I managed to purchase all the stuff needed from alchemist cupboard on the net after a recommendation from a friend. Here I bought pg, VG, nicotine and flavouring and some syringes for measuring the amounts.  With an app off the App Store I was able to enter how much I wanted to make and at what nicotine strength and it told me how much of each I had to mix up.
While it costs me around a fiver for a bottle to last three days, I can make my own up at 89p for three days or 30p a day, cheaper than one cigarette and far more healthy.
So what's 30p a day not even the price of a coffee. I'm much happier on e cigs as now I can control nicotine doseage and hopefully be off these soon too.
Posted by Unknown at 11:26 No comments:

Like with pop bands say the sugarbabes, there is only one original member, so by hostile take over and the fact I had a Team LOTC stamp, myself and figures decided to do a reunion tour minus one member and stamped all caches (apart from the drive bys i did before and after dropping figures off) with Team LOTC. There was the usual size pots about, but a few nice regular caches and some nice views from the south downs. We managed a good 2.3 mph average speed and completed over 100 caches and 20 miles of walking. We both are aching and not suprised, especially how hilly it was including one 250ft climb. A great day and a great laugh, thank you all cache owners for setting the caches we really enjoyed it.
Posted by Unknown at 18:47 No comments:

So after my ESP light came on recently (in the rain along with ABS and brake warning lights) I thought nothing of it, after all Ashmore skoda told me it was normal in the wet, but according to Ridgeway Skoda its not. After using vagcom aka vcds I was able to identify the fault to a brake pressure sensor, it was this that kept the ESP light on constantly. Furthermore it's a fault with all vag vehicles that have K01 brake system., a fault so common and back to 2006 (before my car was made) that most garages knock off 1500 quid on second hand cars they purchase in case they have to replace it.  Vosa are also aware but claim its still safe to drive, yet its an mot failure as its a lit warning light on the dashboard that doesn't go out making the car fail the mot and therefore not roadworthy.
Skoda uk wouldn't give any goodwill telling me my car is six years old and 78k on the clock, even through every service has been with a approved skoda dealer and on time.
So after finding out on vag forums about lots of similar cases I was made aware of a repair kit for around £200, not bad but three hours labour 270 quid. I also needed a service which was another 250 and nearly 500 quid including labour to replace every brake pad and every brake disc as they were worn and pitted. Oh and a courtesy car as it was a full days job.
So went back today to collect my car, paid on my credit card and all seemed fine, car looked ok, but got home tonight and was greeted with swirl marks on every panel, it looks like a monkey has gone to work on my car with a dirty grit filled sponge, I'm fuming, guess where I'm going tomorrow.