NYE countdown with a Unicorn and pi

today I came across a brilliant post on twitter from @rdhayler who has written some coding for the Pimoroni Unicorn Hat add on board to scroll text and now one better, a countdown.

More can be found out from his blog page at http://richardhayler.blogspot.co.uk/2014/12/new-year-countdown-with-unicornhat.html

Now if you are as old as me, you probably know these classics. There is pacman , frogger, spy vs spy, spy hunter, outrun, chase hq, rainbow island, bubble bobble, Tetris, super mario brothers 1-3, sonic the hedgehog, street fighter and then we are up to the games of the current machines.
Now if you are lucky like me, you might have an old NES, sat around with tons of games like me, or you might not have had the chance to say experience the original Atari console. You might have lots of old game roms  stored on a disk somewhere or even a usb stick or have downloaded from an emu rom site off the net (and no I won't be giving any sites due to the piracy technicality) however if you already own legally these roms and want to play them, I can show you how for about £40
Firstly you will need a £25 Raspberry Pi model B+ computer with 512mb of ram. A 8gb sd card, preferably class 10, a usb games console pad (I have a snes one but plenty of different ones out there), a power supply, hdmi lead and Ethernet/wifi connection to start with whilst setting up.
The easiest way is to download the card image from http://blog.petrockblock.com/download/retropie-project-image/ and follow the set up guide.  Much of the hardworking has been taken out of this thanks to the image and with the recommended free software to burn this to sd card you have completed much of the setup quite quickly.
Once done plug into the Pi and boot up, go into the menu and edit the configuration s this is where you can program the usb controller for playing games etc. next exit all together and run raspi-config. Expand the file system, adjust the memory to 256mb and over click to 950mhz then reboot.
Once loaded again you will need to note the IP address. Once obtained, use a file transfer program like FileZilla and log into the Pi using username Pi and password raspberry. Go to Retropie, then click roms and then open up the folder for which game system your roms are for dragging them over from you computer to the Pi. Obviously I cannot tell you to download them or from where, just how to do the step after;)
Once all your games have saved you can unplug the Ethernet/wifi, if into your tv and reboot and once loaded open your game, you will see a message about the usb game controller and bingo you should be now playing one of your old games.

I have so far found amstrad games work, game boy but weird on a huge screen, nes, snes, master system, mega drive. But found n64, play station and anything after about 1998 cannot cope or will not load, but hey this is a retro games console not up to date console so suffices what I need it for and that's to play some classic games.

If you run into any problems then there is the raspberry Pi forums and also  http://blog.petrockblock.com/ where there is a ton of info and walk through guides, next up will be to add the ability to run this through a adafruit Pi touchscreen then I'll have something special.

Firstly open up the packet and sort out the parts.

First job is to solder the GPIO header on as due to it being extended you won't be able to do it later on.

Next the MCP23017 holder, make sure the semi circle indent is the right way round, ie closest to GPIO like the outline is drawn on the board.

Now we move onto the header pins 9 pins per side, I found bluetac a great way to hold the board when soldering it.

Then place the MCP23017 chip in, you will need to bend the legs slightly in to do it. I found holding it and the ends then pressing one side on its side against a flat surface lightly I was able to bend the legs inwards slightly so it would fit straight into the holder. A little bit of pressure is needed to push into the slot but be careful not to use to much as if a leg isn't in place it will break it.

Finally this is how the board should look. 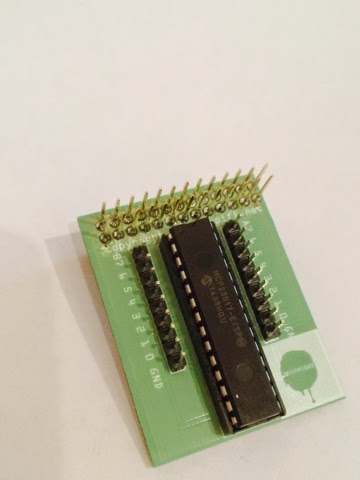 The chip is controlled by the sda and scl pins on the pi.

Heres a video I made in assemblying the board (my second ever video with a new camera), its not the best quality but gives you an idea what to do. the linky is as follows:  http://youtu.be/c9pg37xRwB0

A great write up in getting this running is on the raspberry Pi spy site telling you what to do to set up a mcp23017 device, the link is http://www.raspberrypi-spy.co.uk/2013/07/how-to-use-a-mcp23017-i2c-port-expander-with-the-raspberry-pi-part-1/

Gordon has also written an excellent blog on controlling things though it too using wiringPi http://wiringpi.com/extensions/i2c-mcp23008-mcp23017/

Lastly Alex Eames from the HDMIPI kickstarter and regular Pi blogger has written this with demo scripts.  http://raspi.tv/2013/using-the-mcp23017-port-expander-with-wiringpi2-to-give-you-16-new-gpio-ports-part-3

I haven't written any demo scripts yet as there is plenty about on the Internet, but feel free to send me a link to your projects and I'll add them below.

A great place to get started with demo codes and instructions is here http://nathan.chantrell.net/20120602/raspberry-pi-io-expander-board/ 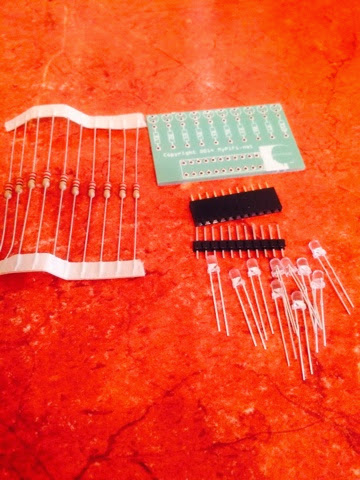 Once opened separate all the bits like above, this will make things easier.

Next start by doing the LEDs, negative to top of board, positive next to resistor, positive will be the long leg and negative the short leg. 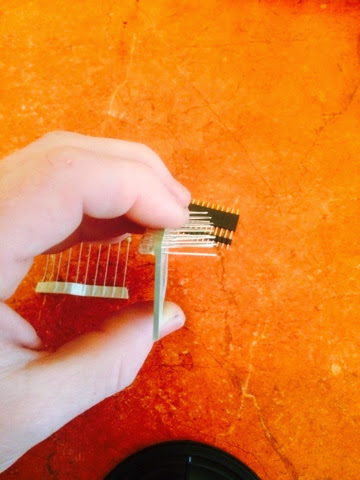 Once in bend the legs to stop them falling out and then place the resistors in, I find placing them all the same way round is useful when using different resistors but here they are all the same so it's more cosmetic that you keep them the same way. 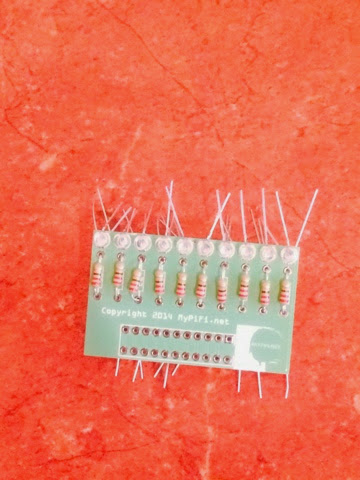 Next is to solder them all, you will see now that by bending the wires out that things stay in place.

Now you need to cut all the wires as close to the board as possible to ensure nothing can connect to other solder points or it won't work properly.

Now to place the female and male headers, these are eleven pins long starting with connection LED 1 up to 10 and the furthest connection on right is ground. 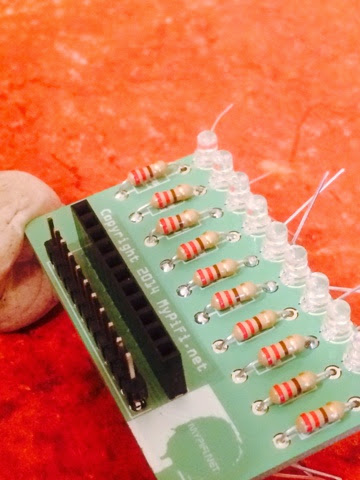 And once finished this is how it should look. 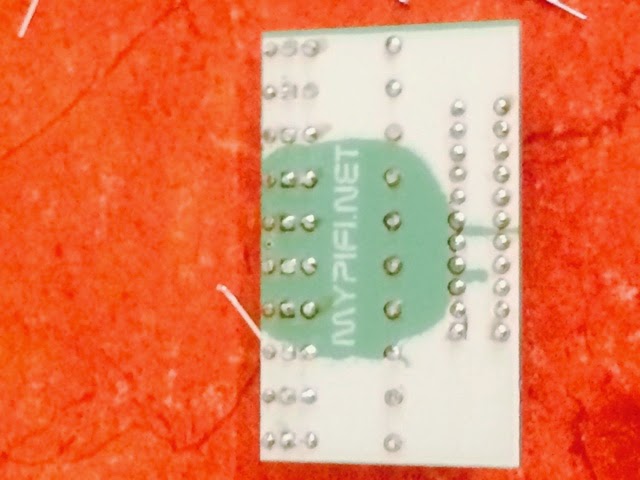 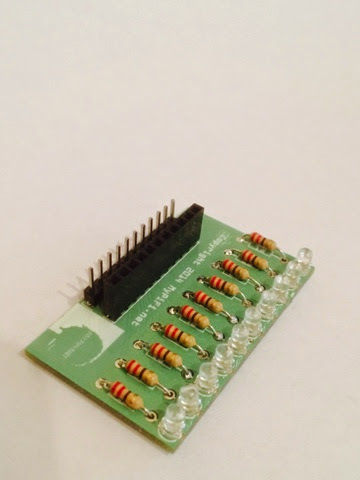 I have done a video (not very good its my first one) which is on youtube showing how to assemble this board, the link is http://youtu.be/o-95sa_lvwo

I will look to adding demo codes in the future for Raspberry Pi, but if you want to write something let me know and I will add a link on here.

If using an arduino there is a great book u Mark Geddes called Arduino Project Handbook which I recommend.

Here are some of the people who have tweeted their boards: 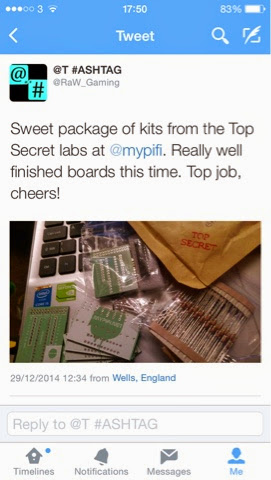 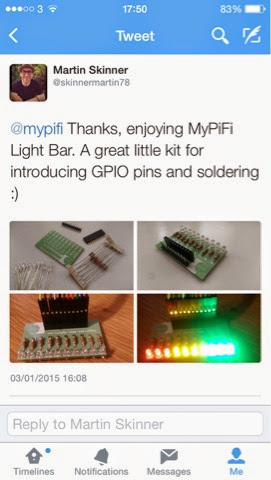 Whilst playing around with the Unicorn Hat from Pimoroni I came across code on GitHub from ForToffee which displays a Christmas tree and balls that change colour to the colour hashtagged on Twitter with #cheerlights. Not wanting to have the last 64 colours or a green tree with the last colour at the top I decided to play with the code so the animated tree turns to the colour of the last colour tweeted. 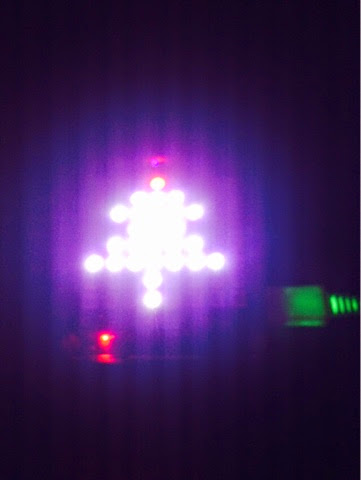 you can also adjust the already very bright neopixels to be even brighter or dinner within the code.
More info at GitHub.com/ForToffee/UnicornHAT and on cheerlights.com
Posted by Unknown at 12:49 No comments:

Eduboard add on board for Raspberry Pi

I first came across this board whilst looking to build an oled display, I would say it's probably the next stage up from playing with leds as this not only has a screen but a RGB led, thermometer and a loud buzzer as well as a few output pins. 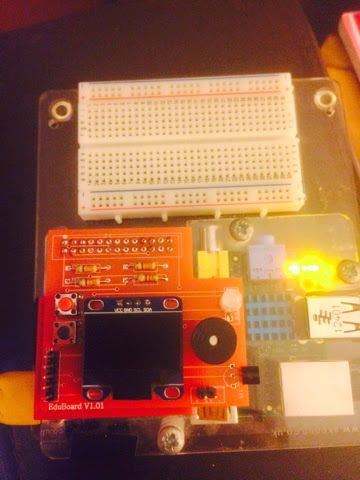 So where do I start? The whole thing came as a kit, a gpio which I didn't swap for an extended header as I would normally, four leds, the three of the same value go in r1-r3 and the other resistor goes in r4. Two tactile buttons, buzzer, 5v power, 5 gpio pins, thermometer and oled and all this took less than half an hour from start to finish to solder.
Next was to download the image file from the site which was around 1gb in size, expanded when unzipped to 7.5gb.  Whilst this is great to get started with I personally would like to see this become downloadable files that you can use on your current favourite image, but as its early days I believe a lot more can happen yet. 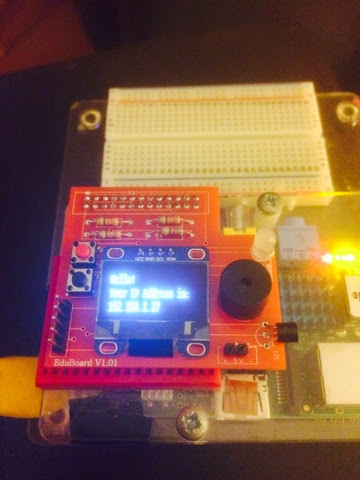 Next up was to fire up the Eduboard and when ready up flashed my IP address and with a browser I entered the IP address which took me to the file list where I could choose what to do next. 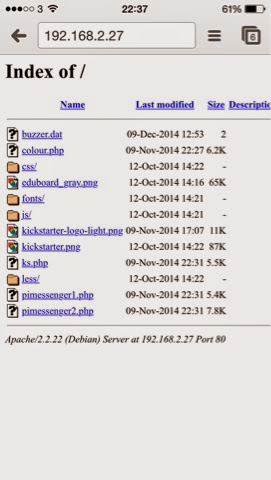 First was the colour.php which you click a colour type it's name and the LED lights that colour.
I then moved on to Kickstarter viewer ks.php and to my suprise my last kickstarter was listed :) you can edit the code and add your own, a project that's 50% funded lights blue, funded is green and unsuccessful is lit red. 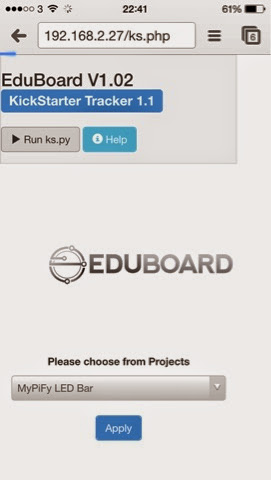 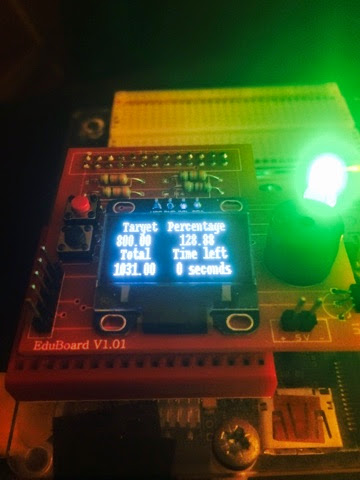 It updates every ten seconds so very up to date and will no doubt be my tool for the next kickstarter.
There was options to send pre defined messages with pi messenger which also gives you the option of adding buzzer notification. 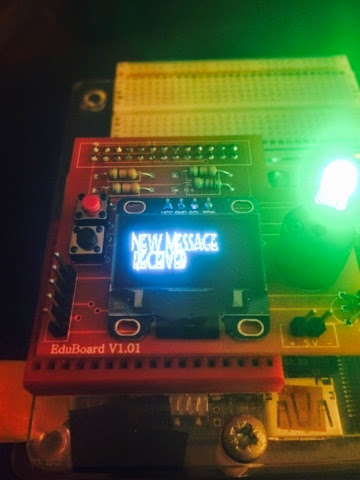 And also option to add your own 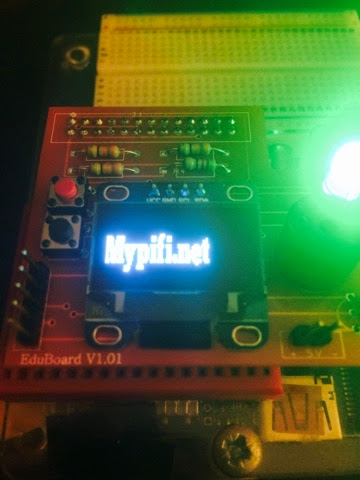 The website eduboard.co.uk will be adding lessons over the coming weeks to teach users how to do things and more info on how to write your own stuff soon.
I can see this over time having lots of tutorials, but one example I would like to see would be a cpu/ram/temp usage display.
So what do I think? Well it's a good price, slightly out of pocket money range, but for what is there certainly cheap. With future support and tutorials for it. Quick and easy to solder with good instructions and good support, so head over to eduboard.co.uk and order yours now.
Posted by Unknown at 23:18 No comments:

Email ThisBlogThis!Share to TwitterShare to FacebookShare to Pinterest
Labels: Raspberry pi eduboard kickstarter add on board

Got my Xmas tree from pocketmoneytronics a couple of weeks ago and finally got round to soldering it up. I saw many of them at last weekends Raspberry Jam in Cambridge aka CamJam.

For a fiver you get seven leds 6 or which are red, seven resistors, a PCB board and gpio header of which you will notice only has 6 pins for seven LEDS and this is the clever but, it works using a thing called charlieplexing.  I won't go into details on it here as its something you can search for later.
I decided to find my bag of oomlout leds and find some nice colours in that and swapped the red ones for a variety of colours before soldering it all together. 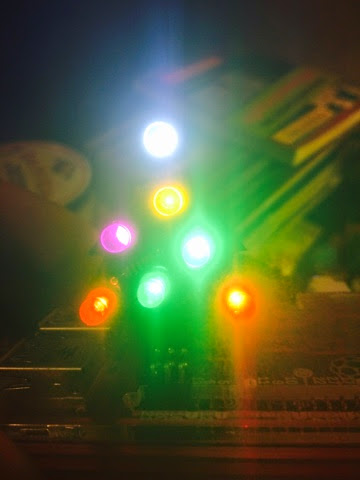 With demo code available on their website you can be up and running in no time and all for around a fiver.
So do I recommend one? Actually yes as it teaches soldering, is an easy project, teaches charlieplexing, coding and is in the pocketmoney bracket.
Available from many decent pi shops and Raspberry Pi Vendors.
Posted by Unknown at 23:46 No comments: