Getting the best with Seat Ecotrainer

This has been something that's interested me for about ten years now after being placed on a fuel efficient driving course.  Before the course I was lucky to get anywhere near 400 miles on a full tank of petrol, but afterwards I could easily get more plus more with 10-30%

Now on Seat cars we have the Ecotrainer which displays your fuel efficiency as you drive. 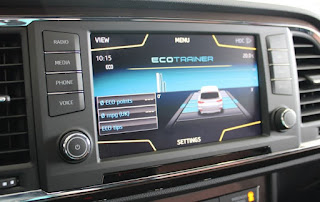 So how do I get the most out of it and score high? Well I'm running a TSI although my last car was diesel which could reach between 60-70 mpg, this one i can get nearly 60 mpg but 50-55mpg is normal, let's look at how we can achieve great mpg and 97-99% eco points.

Firstly is the accelerator pedal, 60% of fuel is wasted accelerating, we want to pull away lightly pressing the accelerator. We also want to change gear around 2,000 rpm for petrol and 2,500 rpm for diesel. Once we are in top gear keeping revs around 2-2.5k and speed around 45-50mph any faster we loose fuel consumption to wind resistance.

We also want to plan in advance, breaking hard means we are wasting fuel, instead letting off the accelerator and using engine speed to naturally slow down instead.

Splitting the road into thirds, getting up speed in first third, maintaining speed in second third and naturally slowing in last third.

Keeping the journey smooth, you will loose points if you don't keep the car in the blue segment and importantly on the left of the screen it will warn you if anything is effecting your fuel economy like wrong gear, too fast or harsh breaking.

Also make sure you don't have unnecessary belongings in the car, a full boot etc can reduce your fuel consumption by 10% also under inflated tyres as this causes resistance and again will affect your mpg.

Roof racks and damaged body work reduces aerodynamics too, along with an unmaintained car, so keep up your services.

Now to the inside of the car again we have air con which uses around a litre an hour and running window heaters will draw on the battery and in turn the engine will work a bit harder to charge the battery, the car radio however doesn't use much.

Lastly don't leave the engine idling, move off straight away, avoid stop start in traffic instead try keeping the vehicle moving slowly, less fuel will be used as the momentum is already there. If you have to stop then ensure you have stop/start enabled as any stops of over 30 seconds will save you fuel and keep your mpg higher.
Posted by Unknown at 01:24 No comments: